Energy drinks are one of the least studied over-the-counter supplements in abundant supply, interestingly, manufacturers determine their safety, efficacy, and content. Regulation by the Food and Drug Administration (FDA) is limited to dietary supplements, manufacturing, labeling, and marketing.1 Yet these drinks are consumed by various age groups. The estimated total sales in the United States was $5.4 billion (2006).6 Consumers are unaware of the dangerous side effects associated with these drinks in combination with other drugs, specifically, hyperthermia and arrhythmias. This article seeks to identify these risks and associations that have been linked to the consumption of energy drinks, and effective treatment.

Manufacturers are not required to divulge all concentrations of ingredients under “proprietary blend” (PB) laws. This law means that some ingredients are kept secret. Among the top-selling energy drinks are Monster, Red Bull, Full Throttle, Sobe no fear, and Rockstar.2

Caffeine, sugar, and sodium are the only consistently listed contents in milligrams and grams. Other ingredients include an “energy blend” (interchangeable with proprietary blend). These blends may be problematic, for patients, providers, and researchers, as the PB is unknown. Most energy drink studies have focused on the primary ingredient: caffeine. There is not much information about the energy blend or potentially toxic effects from various combinations in the actual mixtures. This fact may compromise patient safety when ingesting more than the recommended amounts, or with other substances.

One can of energy drink contains 40–505 milligrams of caffeine (unknown content in the proprietary blend). The recommended maximum daily dose of caffeine for an adult is 400mg. To put it into perspective, six ounces of coffee contains approximately 75 to 150 mg of caffeine. Caffeine blood/plasma serum toxicity ranges from 5–20 micrograms per milliliter.14 Caffeine use has also been reported as a risk for other stimulant use.3

Overview of energy drinks’ main ingredient with other stimulants effects

Caffeine is rapidly absorbed in the gastrointestinal tract, and metabolized in the liver by the P450 system. The major isoenzyme CYP1A2 is responsible for the demethylation of caffeine to dimethylxanthine. Xanthines are thought to play a role in ischemia-reperfusion injury and resistant hypertension.9 This oxidative stress can affect many systems in the body, including the kidneys and brain.

The two major types of adrenergic receptors are alpha and beta. They affect the concentrations of circulating catecholamines. Concentrations of these receptors vary by location. High concentrations are located in the heart, lung, liver, skeletal, adipocytes and vascular smooth muscle.9 Hypertension is the initial effect, then a cascading microvascular affect that causes small arterioles to close, whereby end-organ disease begins. End organ disease precipitates sustained hypertension, which is the major mechanism behind renal and cardiovascular failure.9

Caffeine and concomitant use of psychostimulant drugs, for example, amphetamines can cause altered body temperatures, acute cardiotoxicity, and reduced seizure threshold. Ecstasy is a popular night club drug in this category, the compound is 3, 4-methylenedioxymethamphetamine (MDMA), a compound of amphetamine and mescaline. Caffeine enhances the toxicity of MDMA, the effects of hyperthermia can be immediate or may occur over a period of days.8

Cocaine blocks the reuptake of dopamine (DA), norepinephrine, and serotonin in the central nervous system, but it also causes the release of DA from storage vesicles. Cocaine use also produces hyperthermia. These types of reactions cause oxidative stress in the body, as seen by the following emergency room cases. Keep in mind that emergency room energy drink related problems in the United States doubled from 2007 to 2011 (exact numbers not reported).5 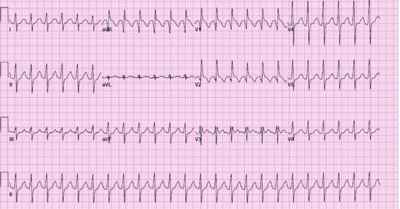 According to the latter authors the earliest symptoms of acute caffeine poisoning are anorexia, tremor, and restlessness, followed by nausea, vomiting, tachycardia, and agitation. Serious intoxication includes delirium, seizures, supraventricular and ventricular tachyarrhythmia, hypokalemia, and hyperglycemia may occur. The authors also noted that hypotension is caused by excessive beta-2-mediated vasodilatation with low diastolic and wide pulse pressure.

Case # 2 (unknown ER). A 26 y/o man presents to the emergency room with chest pain, sweating, nausea, and extreme anxiety. Temperature (101 F), blood pressure 200/84, heart rate 160, and respiration is 30. Heart and lung sounds are normal. He admits to 5–7 cans energy drinks (can’t remember) and cocaine use in the past 24 hours, his EKG has ST changes (narrow complex), and tachycardia. This man was treated with labetalol (titrate to response), and bolus fluids (4 bags of normal saline). He successfully converted to a normal heart rhythm and lived. Urine was positive for cocaine, and blood was positive for alcohol. Cardiac enzymes were negative.

Energy drink misuse has become a widespread problem. In a study, more than half of those (55.4%) who consumed an energy drink reported experiencing at least 1 adverse event, including fast heartbeat, headache, gastrointestinal symptoms, chest pain, or seizures.10 Currently, caffeine-related poisonings are reported to the American Association of Poison Control Centers’ National Poison Data System. In 2012, energy drink overdoses can now be reported under “caffeine-containing” adverse reactions.

The American Medical Association voted to endorse a ban on marketing energy drinks to children under 13 years old, but not the sale of energy drinks.11 The American Academy of Pediatrics concluded that energy drinks are not appropriate for children and adolescents. The National Collegiate Athletic Association (NCAA), the International Olympics Committee, and the National Federation of High Schools also caution children and athletes of the risks associated with the advertised benefits.12